“Consul in Paradise” by W.A.R. Wood: A Book Review by Mike Springate

Home News “Consul in Paradise” by W. A. R. Wood: A Book Review by Mike Springate

“Consul in Paradise” by W.A.R. Wood: A Book Review

There are certain books – “Wind in the Willows” comes to mind – which float effortlessly and forever on the sea of their time, and immerse us in it. Consul in Paradise is such a book – written, originally, before WW2, about Thailand as she was. Forget today’s maelstrom of Bangkok, with its concrete, advertising hoardings and lethal traffic. This shows us the true soul of Thailand, still to be found if you seek it out; gentle, courteous, hospitable, fun-loving, humorous, quirky. As Wood writes in his Preface: “If you are seeking for a serious review of Siamese history, politics, social customs, religion, or anything else, you will not find it…this book contains no information…of practical use…merely a little of the froth collected by a cork which has floated for sixty-eight years on the seas of …Anglo-Siamese life”. But what seas – and what a cork!

I was fortunate enough to meet Wood in 1970, before he died. He was one of a triumvirate of British ex-soldiers – Wood, Hudson, Gibson - who
had returned to Chiang Mai after the war and their last battles against the Japanese, married local girls and settled down in warmth and comfort. Their photograph still hangs in the Bar of the Gymkhana Club, where they spent many happy hours. Major Roy Hudson, my oldest friend, still survives compos mentis at 98; Wood and Gibson rest in the shadow of Queen Victoria’s statue, in the peaceful Foreign Cemetery. His ‘froth’ begins in 1896 when he arrived in Siam (used throughout rather than ‘Thailand’ – he explains why) as a very young Student Interpreter in the British Consular Service. His book is essentially one of reminiscences and anecdotes, though his chapter on elephants reveals a loving expert on pachyderms; “rather delicate creatures” – and later, as an adept at quelling “phi” or spirits. There is “a very plentiful supply of spirits and ghosts in northern Siam”. 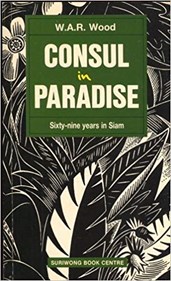 Wood’s duties ranged from dealing with tropical diseases (including plague & leprosy), burials and undertaking, British ‘registration’ (much sought after as it minimised taxation), DBS (frequently fraudulent), British Consular Courts with extra-territorial rights and responsibility for several tens of thousands of ‘British’ subjects – and sorting numerous matrimonial tangles. He witnessed only one execution – but tells of several cases of the police keeping prisoners in safe custody overnight by nailing their ear to a post – not always successfully. He describes Siamese medical treatment based on the four elements of fire, earth, wind and water, with its traditional reliance on charms, natural remedies and massage [at which the Thais maintain their expertise]. There is an interesting excursion into Trial by Ordeal and the varieties of fighting – from the 84 different types of punch legal in Thai boxing, to Rhinobeetles and, of course, Siamese Fighting Fish. His 69 years of residence brought him into contact with the many tribes of the North – Meo, Yao, Lawa, Khamu, Karens (4 sub-types), Akha, Lahu/Musk, Lisu and Mrahbi are all  described in brief but fascinating detail: not all have survived to this day to be picked over by “the numerous tourists who infest northern Siam”[sic].

W.A.R.Wood must have been the archetypal Victorian Consul, immensely experienced, endlessly tolerant, highly competent in all aspects of his (often lonely) practice and representation of our imperial past. “If you want a man who knows everything, you must look for a British Consul…Father and Mother to his subjects”. Consul in Paradise is very easy reading, relaxed and gently discursive in style – indeed it would make an ideal ‘Book at Bedtime’. It preserves the past with truth and affection. If you know Thailand, this is a book to savour; if you don’t know Thailand, this is a book to send you there.

Consul in Paradise by W.A.R. Wood is available to buy on Amazon.

A History of the Anglo-Thai Society by Dr Orapin Dawson and M.R. Narisa Chakrabongse

One Step (Fewer) towards Accessible Public Transport in Bangkok?